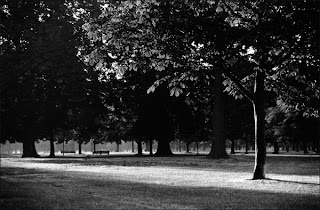 I was living in a backpackers in Bayswater, London, England in my early 20s. It was close to Hyde Park, so one morning, very early (6 am I think), I got up and went to the park in search of photos. I met this man and we had a very long conversation until another homeless man came with a bottle of vodka and some orange juice. I moved on when they both got too drunk and weren't fun anymore.


Another time, years later, this time living in Notting Hill, my friend and I were crossing the park twice a day to go to work. (At a very expensive and posh retail store called "Harrod's") We crossed it because it was about 30 minutes shorter than if we went around it. It was a bit scary on those foggy mornings when we could see nothing in front of us.
Scarier still was when we almost got caught by bobbies (cops)! It was closed after dark so we had to hop over the fence. Sometimes an English girl accompanied us. This time we got chased by Bobbies (cops) and we just managed to hop over the fence to freedom...well all 2 of us except the English lass!
The scariest was when I was crossing alone at night and a guard with a dog spotted me. I decided it was foolish to run so I waited. I put on a very thick French accent (not hard since I'm a French-speaking Canadian.) and pretended I could hardly understand what the man said. The English being so polite, the guard spoke r-e-a-l-l-y  s-l-o-w and showed me the quickest way out. Of course as soon as he had disappeared I continued on.
I was young and foolish.