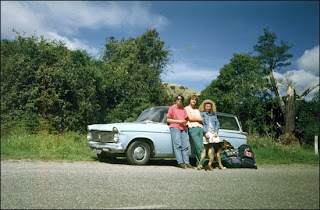 Sorry it's been a while. Lots of excuses but my best excuse is: it's been a crazy last couple of months with all the Birthdays!


New-Zealand:
The first thing that strucked me when I got in the airport is how British it is! The police wear the same ridiculous hats as English bobbies!

But this is not the story I want to relate. You can find out more in the book I'm writing about my 19 years of travel/living abroad.


The South Island is the hippyiest place I've ever been to! Here's a prime exemple.

Sara & I were hitch-hiking , when this old-looking car (see above picture.) stopped. Steven, his friend & Joplin, the dog were offering us a lift. Starting the car was not done with a key, but a kitchen knife!

It turns out they were living on this commune & offered us a bed & to stay as long as we wanted! Sweet!

Our bed was in an old abandonned VW van in the field. Steven's was a tree-house! A whole community of young Kiwis lived on this self-sufficiant farm/commune. They had cows & with that they made milk, yogurt & butter. They grew everything, from garlic, all sorts of fruits, veggies, wheat (which they grind to make bread!), everything I say! You name it, they were growing it.

There was a kitchen and everyone made dinner, each had their turn. to cook for everyone else.

It was like that all week, til Friday, when they'd go into town. Get their dole money, get pissed all weekend. On Sunday, they would return and do the same thing again.
After 3-4 days, we moved on.

Our budget was extremely restricted, so we had to hitch-hike everywhere, from North to South Island. We found the general Kiwi population very friendly and welcoming. Turns out, the Canadian flag on our backpacks was helping us a great deal.