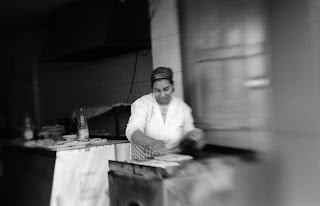 Morocco in 1990 & the Morocco now are worlds apart! Still every bit as exotic & mystical though but much less daunting for the Westerner.

On my first visit, with my travel buddy Sara, we arrived for the beginning of Ramadan, the month-long fast, a bit weary, but excited, about our new adventure destination. Since we came from mainland Spain, we took a ferry from Algeciras to Ceuta. (Ceuta being the portion that still belonged to Spain.)
On the bus that transported us from the pier to the town, our troubles already started. Unknown to us, the fight for our "business" had already started between the Moroccans  going back home for the Ramadan.

The next day, we made it, on our own, across the "border" into Morocco.  We took a shared taxi, along with 4 others plus the driver! Yes, that's right, 6 passengers! We were squashed in the back with 2 others, with loud music blasting. We were in a very unfamiliar setting, looking at each other thinking: "OMG,  what did we get ourselves into this time?" We were so naive!
So many details in our week-long adventure in Morocco. (It's all we could afford.) I'm writing it all in details in my book but here's what stood out:
-  Hamed's American name, given to him by an American. The name? He told us proudly: Jack Daniels!
-  On the bus, hearing the language, we thought that everybody was upset at one another.
-  Having my first Moroccan "whiskey"! It's an overly sweet mint tea.
-  Being followed up & down the streets of Tetouan.
-  The first time I had a "toke". It gave me nightmares! I was fully awake, sitting on my bed & I could still see a humongous tarantula on the ceiling!
-  Giving all of our money to the bus' conductor for him to exchange  and watch him disappear into the village's souk.  In the end, he came back with all our money sorry that he couldn't find the exchange man! (my Guardian Angel is GOOD!)

I returned, on my own this time, 15 years later & my experience was totally different. On my visit in 2005, I quickly made some new friends. They took me to many different parts of their country. Places with lush green vegetation & vervet monkeys (Ouzoude's falls, breathtaking!), a magical kashba (Ait-Ben-Haddou), the famous city of Ouarzazate (where a lot of film were made) & a few villages on the edge of the Sahara desert! I even took a short trek on a camel's back in the Sahara! Total silence.....until my friend's cell phone rang! Umf!
I learned that any local can get fined & go to jail for being with a foreigner, even if that foreigner is a friend! One needs to get a permit from the police. I experienced that in Fez, staying with a family & being taken around. On subsequent visits, I spent much time in Essaouira, going to Marrakesh, trekking in Essaouira's surrounding mountains, learning Moroccan arabic  and tried to blend in as much as I could into this magical country.
Morocco remains one of my favorite country.

Here, on the picture, Lahtifa is making melouis. It's a corn crepe, delicious with butter and honey. I'm drooling just thinking about it!
at 9:53 PM 1 comment: Links to this post