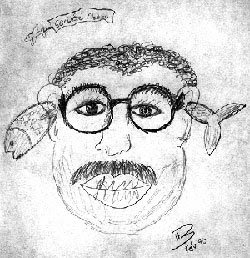 This is one of THE most incredible travel experiences of my short life!!! (ok not that short anymore!)
Sara & I were in the beginning of a 3 month stay in her uncle's "villa" in sunny Andalucia. We soon got bored with lounging around and decided to go to Portugal. Because we had no money, we decided to hitch-hike there.
After a cold February night in '90 sleeping on a beach (remember we had no money to spare for a room somewhere.) in Southern Spain, Sara and I started hitch-hiking again on the main road.
Soon two cars stopped. We hopped on the one with the two Spaniards; the other car had four Moroccans in it. What we didn't realized is that they were all together, on their way to a business meeting in Cadiz. One of them was Amal Kabli, a millionaire who owned a big fishing company. He invited us to Las Palmas in the Canary Islands. After some hesitations and doubts, we went.
We had our own hotel room, 300 meters from the beach. After work, him and his bodyguard Zazi would pick us up at the hotel for dinner at a nice restaurant of our choice. Sometimes we'd finished the evening at the local disco or an outdoor cafe. Whatever we'd do we would always have a good laugh together.
Getting bored fast, we took 3-4 days to hitch-hike around the island. After three weeks, we being restless, he sadly put us on a two day cruise ship back to mainland Spain. Amal was a kind, generous, workaholic and laid back man. Zazi, his bodyguard was kind and humorous. In the end we never made it to Portugal but it was the most incredible three weeks we've had so far.
Because we returned to "our" villa (appartement in English) with more money than when we had started 3 weeks earlier, we decided to go to Morocco!
After 7 days of incredible adventures in Morocco, we returned to mainland Spain completely broke. We were planning to hitch our way back to England but still needed some money for food, so we called Amal to the rescue. He sent us some money for our return to London.
This is a drawing I made of Amal while lounging on the closest beach to our hotel room.
at 8:15 PM No comments: Links to this post 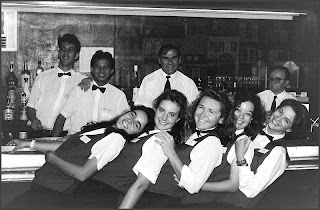 "...the funship, so much fun on the one ship...."
It started when in Sydney, Australia. Sara and I were looking for a way to return to Fiji. We answered an ad and started working on the Fairstar on its next voyage.
The ship had 5 bars, a hairdressing shop, a shop, a pool, 2 dinning rooms, a discotheque and I'm forgetting what else. Sounds exotic and fun? Probably was for the passengers. Being a cocktail stewardess (fancy word for waitress) meant working days of 9 to 11 hours depending on weather you were on early or late shift, and that everyday the ship was at sea. A day off meant working 7 to 9 hours.
Working on the ship meant free lodging ( in a room with bunk beds) and free food and was a good way of seing some of the magnificient South Pacific islands. So the advantages were worth the slave labour. Although we worked hard , we (the cocktail waitresses) managed to have some fun. When it was all getting too much, a bunch of us would sneek in the disco at night. Or on rare overnights in a harbour, we'd hit the local "club" after work. And of course visiting those amazing islands often, meant that I could make some "local" friends.
Some of the islands we went to: Vanuatu, Fiji, New-Caledonia ( with the Isle of Pines being the most beautiful island I've ever seen!), Solomon islands and Papua/New Guinea.
This photo of me and some coworkers (I'm on the far right) was taken in the Lower Zodiac bar- the family bar with live entertainement.
at 2:27 PM 2 comments: Links to this post

My first castle ever! 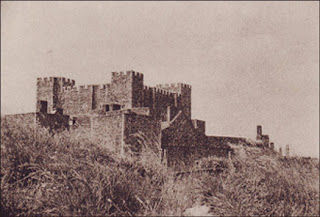 It was on my first trip to Europe that I encountered my first castle: the Dover castle in England.
I arrived in England by boat. My first view was of the white cliffs of Dover. I remember a man (bloke) gave me a lift from the pier to the town and he had a good laugh when I wanted to get in the car on the wrong side. I had forgotten that in England, everything was on "the other side".
I was staying in a B&B and when I asked how far is the castle from here, I was told : "Not far, about 400 yards.". ???? 400 yards? To me of the metric system, it sounded very far but it took me only 15 minutes walk to get there.
To make the event even more special, I happened to go when it was reenactment day. There was all these men with swords in mocking fights and inside the castle, I encountered women in period dresses.
For a North American, it was a big deal.
at 10:38 AM 2 comments: Links to this post 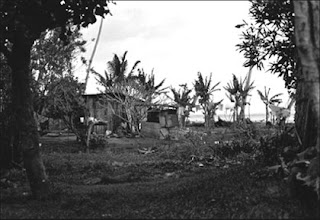 I just have to speak about it some more and tell you the story of our stay in Uluibau village on Moturiki island.
We spent 3 marvelous weeks, living with these people. We mostly did not much but also participated in daily life chores. Watching the women and kids fishing on low tide was magical. They run in circle with a net, when it's together, they proceed to run in all directions hitting the water with sticks and shouting. (This scares the fish into the nets, they just have to collect them!)
We also learned how is made that wonderful smelling oil that they rub their bodies in: grate coconuts, twist it in some fiber net to extract all the milk, boil it til the oil separates from the milk, bottle the oil and add some local flowers and voilà.).
We helped serve all the chiefs from the neighbouring villages, in the village for a conference. You see, the women serve the men, then the women eat together. Patriarchical you'll say , yes, but the women can also eat when they're cooking! Later we watched a "meke", the women dancing and singing. Beautiful.
The day before our departure, they (our new extended family.) made a huge breakfast, with toasts! (we hadn't seen bread for 3 weeks!). The dinner was very plentyfull, peppered with speaches and "our" was crying and it all ended with a huge yagona (kava: a brown-looking-nasty-tasting national potion) party where most of the village attended, filled with singing and plenty laughter.
This is where we lived while on Uluibau village. A very simple hut ( with 3 doors-a Fijian house has alwas 3 doors.)which had for only furniture a rickety small shelves. The kitchen was outside and the toilet was on the other side of the house.....but the house was by the beach! We were lulled to sleep with the sound of the waves.
This is just a few things that I saw and learned while I was there....and in only one village!
at 6:48 PM No comments: Links to this post