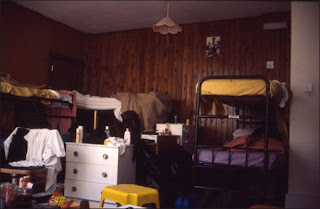 What can I say about the Pembridge hotel, or where do I start?
The location: Bayswater, London, UK.
It was where I started my real life. It was a Backpacker's than a "proper" hotel, full of young travellers like me, broke and eager to explore the world.

How I got there? A long story (of which I will explain more in the book I'm writing) but here's the jist. I was living in Germany and after 1 1/2 months I had enough of Koln and left to London, on a whim. Someone scooped me from Victoria train station and brought me there. I arrived broke and in desperate need of working.
I was immediately put on breakfast duty for more fortunate backpackers. I was not earning much but I got free board and I was making it on my own in London!
I also took another job outside the hotel as a waitress in a cafeteria-style new restaurant. During my time there, I had plenty of different jobs, none of which ever lasted a long time - meaning more than a few weeks.
I was a "runner", waking people up and "running" all over the hotel. A job that was given to me by a friend when I was jobless and homeless, playing hide-n-seek with the managers.
I also became an hotel "taunt", scooping people off Victoria train station and bringing them to the hotel. That was a fun job. I was put in a big room nicknamed "The Tree House" and is where I met Sara, the one that became my best friend. At Victoria station is was with the "bobbies" (local policemen) that I was playing hide-n-seek with. Technically, our job was illegal as we were taking customers from paying hotel booths on site.

The main attraction to this hotel was all the young travellers I met, in the same situation as me. There was Spaniards, Mexicans, Aussies, Kiwis, Americans, Brazilians, French, Canadians, Chileans, East Europeans, you name it. We bonded and helped each other. I made lasting friendships, some to this day, 20 years later.

It was an off and on stay as I often took off hitch-hiking through Europe or just for a day to Dover, because I was bored.
I also worked at this new restaurant in the basement of The Pembridge called Ruby In The Dust (that's another story). I started out as a waitress, then went on to be head of the salad bar kitchen. I was in charge of the cold starters, the drinks and the desserts. Also it was there that the dishes were cleaned. I had many wild nights there with different "dishwashers".
So many fond memories of my time in Bayswater, London. I think that everyone should have a "Pembridge" in their life.
The photo above is of the "Tree House", with my bed being with the yellow blanket on the top right.
at 4:49 PM No comments: Links to this post