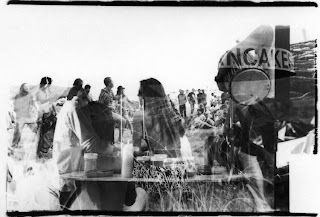 I've always been very lucky in my travels. I like to think that it's the aura I project or my Guardian Angel.
This story is no different.  How I got there is a long story, a compilation of events.  For months now, I had been told by different people that I would enjoy this particular music festival, the Rustler's Valley Easter  Festival.  I was thinking : "Yeah, yeah!, It's too far and too expensive for me."
I had been lucky to be living in Eshowe, Kwa/Zulu-Natal for a few weeks now when I bumped into a British girl who I had met in Zimbabwe a few months prior.  She told me that I could work there, at the festival, in exchange for a free entry to the 4-day festival. She knew the British guy who owned one of the four bar/stages, the Comet Stage,  around the venue.  I got hold of him and secured myself a job at his bar and a free entree to the music festival.  Next I spent a few days at a friend of a friend's house in Durban. He lent me his sleeping bag. (I had none!) His roommate drove me to the first town, starting me on the long bus (buses) journey that took me eventually to the festival site.
I arrived there, found and met the British guy I was to work for. I still had no place to stay. I walked around and found myself at the only part of the 4-day festival, that was almost set-up. There I ran into a musician friend (I was working in a music venue in Capetown) who invited me to stay in his tipi, along with 2 of his friends. The best part was that the Tipi Village (it's official name), was a commune and the food was free. One only had to cook a meal for the group (9 people, I think) once.  It was the hippy-est part of the venue and home to the Drum Circle.

Along with the Comet Stage, a place for musician to jam, there was the World Stage, where , you've guessed it, international bands and more "serious" South African bands would perform, the  Future's Field, a trance tent with live DJ and the Drum Circle, where all kinds of djembe drummers would jam, sometimes all night. There was also live performances of all sorts in the main building, and home to the official "Backpacker's". (another name is the Youth Hostel)

This picture above is an unintended double exposure. It's a picture taken at the Drum Circle and a pancake stand, on the main "road".  I was major pissed off when I processed the film back in 1998, but now, I find it perfectly reflects the confusion of the festival.

To read more on how I got there, please read this previous entry:
http://elenisworld.blogspot.com/2008/10/im-pool-shark.html
at 7:03 PM 3 comments: Links to this post