Tree house in the Mozambican jungle. 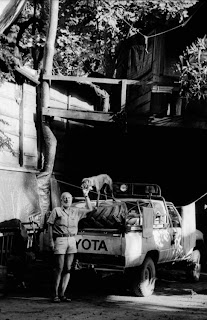 Mac & his dog in front of part of his tree house. Moz 1997.
Me staying at an out-of-town hotel on the border town of Zimbabwe, called Mutare, led me to spend 7 days in a tree house in the middle of the Mozambican jungle. Stuff one only dream of but, on that day, it really happened to me.
This man called Mac, was giving me a lift into town when he asked if I wanted to spend 7 days in Mozambique. What anyone in their right mind would say? "Yes!", I said excitedly. What else would I say?
I stayed in one of his spare bedrooms, up the main tree. (The house was built on 2-3 trees & a big wooden fence to keep the wild animals out.) I remember vividly my first night, up in the bar, sipping a glass of Amarula with the bushbabies (monkey-like animal that makes a sound like a crying baby.) and a distant drumming & chanting of a village nearby, a multitude of stars glowing in the night sky.
I couldn't feel more in Africa than this!

With day visits to nearby towns of Chimoio & Gondola or visit to local tobacco farmers, I was kept busy. All this traveling was always done before the sunset. It was that dangerous that Mac kept a loaded gun under his bakkie (truck) seat!

We had one adventure that I'll remember for a long time to come! We were ridding on a bush trail to get to a good fishing spot when we encountered tree trunks blocking the road. We were a bit apprehensious because the rebels are are known for using this tecnique to ambush cars & trucks. Nothing happened except for the most venomous spider in Mozambique. A tiny spider with a white body. Brrr! It stayed on the outside windshield, on the driver's side, Thank God! I was staring at it the whole time we were stopped. I was thinking of a plan in case it moved.
Here's what went through my mind at the time:
Screaming was out of the question (I'm too proud!)
Opening my door to go where? I open the door straight into the jungle! The jungle up-close look scary!
Nor was closing the windows, it was way too hot & humid.
Besides, it is not recommended to stray from the well trodden paths as the country is still full of land mines.
In the end, we got to the fishing spot. He gave me a line & told me to catch a fish. He was going to a bigger river. I caught a fish minutes after he told me to! 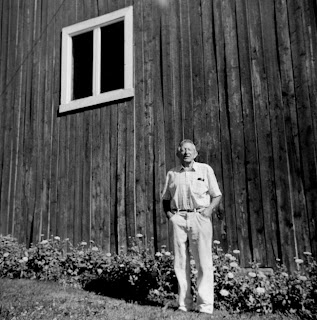 Sara & I decided to go fruit picking in Norway, mainly on a whim.  We had heard from a friend that it was not only possible but also could be good money.
Having  no money, we decided to hitchhike there. The easiest way was to hitch to Newcastle-Upon-Tyne and take a ferry across to Bergen.  When we got there, after many  adventures, (like sleeping on someone's  living room floor in Newcastle.), we found out that it was too expensive.  We hung out at the  docks 1-2 days in the hope of someone offering us a passage. No luck.

We hitch back down to London, spent one night in someone else's living room floor, we made our way to Norway via  Belgium, Holland, Germany, Denmark, Sweden to finally arrive in Oslo early evening.
We met other hitch-hikers who were on their way to celebrate the Berlin Wall coming down, with Pink Floyd performing. However tempted we were, we quickly had to rid ourselves of that idea as we were broke and continue with our original plan of finding work in Norway.
Thinking of sleeping on the floor of the train station,  we found out that the station was closing for the night. Too cold to sleep outside & too broke to sleep in a youth hostel. We were trying to find plan B when a young Somalian/Ethiopian student, called Aabi, overheard us & offered us to stay in his apartment.

The next day, we hopped on a train to the rural areas where we could find fruit picking work.
After a full day of fruitless (no pun intended) search for a job, we were just looking for a place to sleep as it was dark already. The strawberry season had started 2 weeks earlier and all the jobs were taken by Polish workers.
We knocked on a door and eventually the family offered us their living room floor for the night. The next morning, we were told that the grand-father wanted to meet us. He was also living on the land. Despite the fact that he didn't speak much English & us no Norwegian, we had a fun breakfast all 3 of us.  He even gave us a backgammon travel board for the road. To this day, the backgammon game is in Sara's kitchen.
Soon after we were on our way to Bergen.
Photo of Tony, the grand-father.  Egge farm in Lier, Norway. July 1990.

How I ended up in Hawaii is quite a story.

Sara had convinced me to go to Australia with her (I was easily convinced!). Since we were flying from Los Angeles, USA, we took a 4days & 4nights  bus trip from Montreal to LA. Many adventures along the way. We stopped to sleep in Chicago, Las Vegas (but we didn't get much sleep there!) and Denver. Our flight included a 2 days stop-over in Hawaii.

On the plane to Hawaii, we met 2 other Canadian girls. We hooked up. We arrived at the Honolulu's airport quite late and found all the youth hostels and B&B full or not answering their phone.

Our plan of action, was to spend the night at the airport. Meanwhile, all the other tourists were being escorted to an hotel by a hotels rep with a limousine. Pretty soon, all that was left at the airport was us 4.

The rep was adamant in not leaving us at the airport. He gave us such a good deal that could not be refused. He brought us in his limo to an expensive-looking hotel to our own suite with a balcony with a view to a beautiful beach in Waikiki!

The next day, we separated in 2s and hitch-hiked to stunning Waimanolo beach. There we met (thanks to Sara's bad cigarette habit!) 2 local lads who took us to Hanauma Bay beach to snorkle (with their gear) with all those tropical fish  and a promise to take all 4 of us to a local restaurant for brunch the next morning! All free of charge and no strings attached! That evening, we all went to a local discotheque. Partied all night .The next day, I slept like a baby during the entire 6h flight to Fiji! I had never managed to sleep on a plane before that.

Talk about starting a trip well!

This drawing is made by me. More details in my up-coming book.