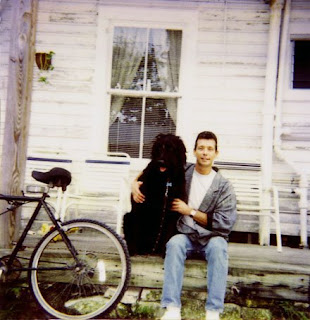 Travis with his dog, Simonton, in front of his house.
(Taken with a polaroid cam.)


After, Sara and I returned from Jamaica, Sara returned to Canada to pursue her studies. I stayed back in Fort Lauderdale. I just worked long enough (10 days) to make some money to get out of there.

I met a Dutch woman, older than me (back then everyone was older than me!), and we rented a car going to Miami, looking for work on a cruiseship. It did not happen so we drove down to Key West where we heard that it was easy to get a job despite having no "papers".

It's a small island at the end of the Keys, technically part of Florida but very much island life.
When we arrived, it was very very hot and humid. I could not walk more than a block without having to drink some water! I much prefer that to fall and winter in Canada!
I first lodge at a youth hostel. I quickly moved out to rent a room in a splendid old colonial. house. My room was vast, with lots of furniture and a balcony that went all around my room. The house also had a pool but the owner (an old lady) was dirty. The rent was not cheap either.

While I was asking for a job at the local photo lab, a man (Pat Clyne) heard me and offered me a job as his assistant PR director for Mel Fisher, the greatest treasure hunter! I said yes on the spot! Most of the time the work was quite tedious but occasionnaly I had to photograph a gold coin for a potential buyer, make the museum's first newsletter, take trips to Key Largo to do stills while Pat was filming and a Miami court (the law on "finders' keepers" for treasure found near the Florida coast.) Amonst my favorite activities was going in a Cesna, a small 4 seat-plane, and jump clouds. I was to learn scuba diving and under water photography.
My dream job lasted about 5-6 weeks. It ended because they could not get a working permit for me.

Meanwhile, I had moved out of the house and moved into a shared 2-bedroom appartement with a lovely Norwegian woman and a weird alcoholic American scuba instructor. The place was tiny but my rent was cut by half. I shared a tiny room with Idun, the Norwegian. The house was situated in the Bahama village - the "black" neighbourhood. Our next-door neighbours was a sweet Cuban family. It was definately more "colorful" than my first place!

I quickly got another job, selling African art in a stall on Duval street (the main "drag".), next to Tootsies restaurant. I was working for a quiet Kenyan lady named Mary. I remained there until I had to go back to Canada for an exhibition.
To see more of my photos, please visit my Flickr stream.
at 3:06 PM 1 comment: Links to this post 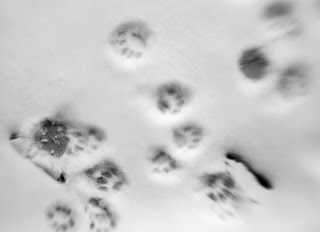 I just added a "widget" that makes it really easy to follow my blog. It's on the side bar, near the bottom.

So don't be shy and travel with me! 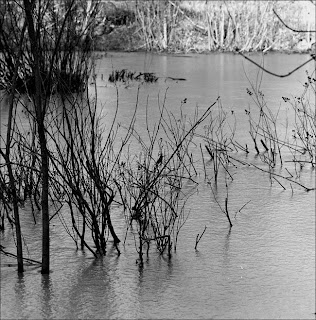 I don't have any pictures of my Hasselblad 500CM but here's a photo taken with it, taken circa 1987.
For those who don't know, a Hasselblad is the Rolls Royce of the medium format camera and it's expensive.

How I came to own one is not the story here.
When I started to travel, I brought it along with me. In the late 80s, I was living in London, England, in a youth hostel. I kept it locked in the hotel's safe for security.
One early morning, I was awaken by a frantic friend, who asked me if I had anything in the safe. "Yes, everything." " Why?"
"Everything was stolen!"
So I got up quite fast and was greated by the police on the scene of the crime. As I was describing everything I had in my bag (apart from my camera, I had my passport and all the money I had left.) , the same friend told me to come have a look because there was a couple of bags left.
So, I had a look and about the only bag that was left was my old and scruffy looking bag....with everything in it!
The morale of this story is, never NEVER put your valuables, (camera or otherwise) in a camera bag or an expensive-looking bag! The thieves had left my bag alone and I had the most expensive camera in the lot!
After that episode, I was too scared to travel with my Hasselblad anymore (with no insurance- too expensive!) , so upon a visit home, I left it there. Later sold it for more travel dineros.
My present camera (my trusty Nikon FM2-a totally manual 35 mm) is in a padded lunch bag.
To see more of my photos, please visit my Flickr stream. To buy a photo, please contact me.
at 12:22 PM 4 comments: Links to this post