Sons of the Desert 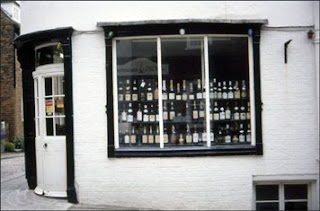 I was looking for a pic of them but have none, so I found this unrelated pic of a Rye bottleshop in England.
This is a band that I discovered (actually someone brought me to see them!) back in March or April 1989.


It's the kind of band that if you feel blue, you go see them and you feel great! They were playing every Sunday at Elephant & Castle pub in London.


There were 5 members and many instruments. Most played more than one instruments. There was the fiddle, saxophone, guitar, bass, bohdran (Irish drum), trompette and the electric mandoline. I'm probably forgetting an instrument or 2. The members were: Steven, the Yorkside lad (with the thickest accent I've ever heard back then!) who played the bass; Jim the guitarist; Joseph, from Belfast who played the fiddle & the saxophone; Tracy, played the bohdran, the trompette & had a magnificient voice and, finally, Ewan, the ever-so-excentric leader of the band, played the electric mandoline like Jimmy Hendrix played the guitar and also lead singer.
At first 3 of us went religiously to see them every Sunday, then soon, almost the whole of The Pembridge came along. The word spread out quickly!
After a few months, I was going to Ireland and went with 2 Irish (also fans of the band.) who were visiting family. They were going to see SOTD playing in Salthill, close to Galway. I came along only to find out that they were opening for The Pogues! (A major Irish band, quite popular in Europe) I went to the after party. The next morning, I was asked if I had any set plans. I said "no" and was promptly invited to tour with them! I quickly learned that the life of a touring musician is not glamorous: driving to next town, sound check, guig, after-party (maybe), driving to next town and so on! It was just a 5-day tour, Thank God! Their manager was telling everyone that I was his assistant! I was very lucky to see the "insides" of a band.
I found out about 1 year ago, that Ewan & Tracy got married and moved to France. The SOTD is still alive. You can find out more about them (and hear them!) at : Sons of the Desert
at 7:00 PM 5 comments: Links to this post

Ruby In The Dust 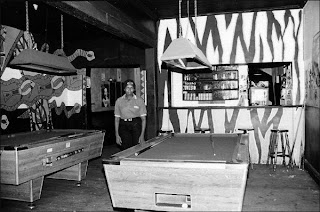 The restaurant started life in the basement of The Pembridge Hotel in 1989. It was runned by 2 young South Africans: Anton and Jonatan.
I was part of the cleaning-before-opening process and started as a waitress. I made a poor waitress. After a tiff, I was quickly put Head of salad bar kitchen. That was a lot of work but also a lot of fun. I was in charge of making the cold starters, the desserts and the drinks. The ever-changing dishwasher was also with me.
Nine years later, I found myself in South Africa. I was in desperate need of work (read: money) and I heard that Anton had opened a Ruby-in-the-Dust in Capetown. By now it was a music venue and a bar with pool tables. I found myself serving drinks to young Capetownians while listenning to local bands. Some great, some good and some very bad.
Soon it was decided to open a small pizza place on the top floor, in the back. We sold home-made individual pizzas, all made from scratch, including the dough. My pizzas soon became popular and known as the "Helen Special". Toppings: pineapple (fresh), garlic, hot peppers and mushrooms.
A very basic bar/music venue but the local place to hip young Capetownians of all walk of life. I made some great friends and heard some brilliant music. It closed whenever there wasn't enough people left: 2AM, 3AM, 4 AM.
It was in Capetown that I turned the big 3-0.
This photo is of the bar with Nohoko, after hours. (early morning)