Jump up and wave! 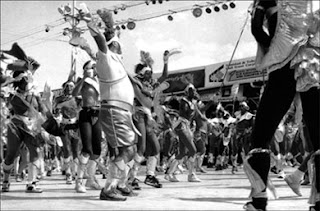 After my amazing experience at Notting Hill Carnival in London, England, I wanted to experience it's inspiration Carnival in Port-of-Spain, Trinidad.

Carnival in Trinidad is not a 2-day thing like in London- it's a 2 month-long of festivities and for some (if not most), it's a year-long thing!
All of the competitions and fetes (parties) starts immediately after Christmas.
There's the Capypso "tents", presenting Calypso concerts. (Trad calypso has an easy-paced, distinctive beat and strong lyrics laced with satire, jokes, elegies or indignation about current personalities and events.)
The Calypso Monarch and Young King competitions in San Fernando, Mas camps all over the city (Mas for Masquerade), Steelband competitions (with Panyards all over the city.)
The whole island is in a party (fete) frenzy for 1-2 months!

I arrived in POS airport a bit nervous as I was told by numerous people that it was a very dangerous and rough island. I was immediately surrounded by regular taxi drivers that wanted my business. There was competition amonst them at who was going to get "me". I had a phone # of a friend of a friend. I called him hoping desperately for help. He told me to look in the phone book to find a hotel and take a taxi! So, I went to the "tourist" office to find help. A shared taxi, a maxi taxi ( a van holding about 16 ppl) and another shared taxi later, I found myself in an affordable hotel. A couple of days later, I befriended a Karen, who found me a room with a local family. I was set the month.

The "proper" Carnival starts on the night before Carnival Monday, with J'ouvert- a contraction of "Jour Ouvert" or "daybreak" in English. Two Brits of Jamaican descent were staying with us for the Carnival time. On that night, we had a few shots of white rhum. I hate rhum and normaly don't drink but I wanted to do like them and experience the Carnival at it's "full". Silly me!
At first I was ok but on site (a POS street), waiting for the "right" band to follow, I started to feel the effects of the rhum. Unfortunately for me, I also mixed it with a bit of smoke and by the time, we were ready to follow the band (dancing behind a giant truck loaded with speakers), I was completely legless! I was sprayed with paints, beer, soda, nothing worked.
So after a while of having 2 men on each side, carrying me around, I was "dropped" at a house were I watched the procession from a stand. I vaguely remember being given water, "salts", coffee and some food. In the morning, I was picked up and we drove back "home". What a night!

After that night, I remained sober for the 2 Carnival days and had much fun in the madness of it all.

I remember the National Road March Song (winning song that gets played the most at the carnival) was "Signal to Lara" by Superblue. That was in 1995. "Lara" is Brian Lara - Trinidad's Cricket National Hero.

What I mostly remember is the friendiness and joyfullness of all the Trinis I met....and the delicious food!!!!
at 5:01 PM No comments: Links to this post 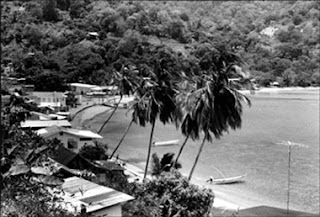 On my first visit to Trinidad and Tobago (T&T), I wound up in this charming fishing village at the end of Tobago island .
It was a classic case of "love at first sight", and I hadn't even set a foot in the village yet.
I had a lovely rustic old house up on the hill over-looking the village. I was the lucky first "tourist" to stay in that former home turned into a rent house. How I got it? I insisted at the POS tourist board for a cheaper house to rent.
"My" house was surrounded with all kinds of fruit trees: mango, pawpaw, lime, almond, passion fruit, coconut, you name it, I had it! I was in heaven!
Before long I had made lots of friends. I heard: "Awright Helene?" all around.
So many fond memories of that first trip of many to this island. I loved going fishing on the high sea with my friend Pash and his boat. Was never successful though but it was a fun time.
Back then it was the "end of the line".
Unfortunately those peaceful years are long gone...
Over the years, I have returned many times, each time it was getting more touristy.
Last time I returned, my favorite spot to get my peanut punch (delicious punch made with peanut butter) had turned into a internet shop/fishing tours owned by a couple of Austrians. The tourists (mainly Germans and Austrians) had bought land and built hotels, coffee shops, bars, internet cafes......
"My" village wasn't a sleepy fishing village but a bustling tourist "ghetto" (like a friend says) like the rest of the island.
It's all good for the local economy but not for me....so I'm on the look-out for another "sleeping" village I can make myself at home.
To see more photos of Tobago, please visit my Flickr stream.
at 5:32 PM 1 comment: Links to this post