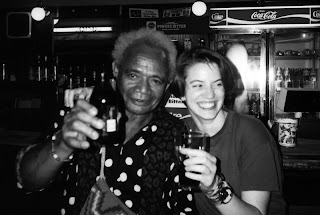 Many memories of my 1 year in Sydney. Where to begin? At the beginning one might say!

Let me first tell you how I ended up in Australia in the first place. I never had any desire to go there. I never mentioned that I wanted to go there. I happened so fast. I was all set to go visit a friend in San Francisco, USA. Sara called me saying that she was going there and "what about us traveling together?" It was all it took.

So, by the time we (Sara and I) arrived in Australia (via the USA, Hawai'i, Fiji and New-Zealand), we didn't have enough money to leave the airport! We called Sara's sister's friend's boyfriend. He picked us up and showed us around before leaving us at his girlfriend's flat (apartment).

It took longer than we thought finding a job,  so we had many filler jobs in the mean time like selling roses (1 night), being "squeegees" (washing car window at light stops) (3 days).

In the end, I never had a full time job but a lot of very part time jobs like teaching French to University (Uni in OZ lingo) students. The coolest job I had was working as a B&W technician for a professional darkroom 1 day a week.

I did attend to a lot of concerts. I saw Midnight Oil, INXS (with Michael Hutchence!), Yothu Yindi (an aboriginal group, totally awesome!), Hoodoo Gurus, a few reggae and African bands, to name a few.

We did visit a campground where wild kangaroos came to us for food. The little Canadian girl  was impressed. I can say, without a doubt, that the kangaroos ("roos") don't communicate with "click" sounds like Skippy did in my childhood program.

My most cherished memory is meeting Mannie Torishiba, the man on the photo.  He was a gentle soul from Papua/New Guinea who came here (so he told us.) as a footballer. We met him one evening at Champion's bar in Sydney's suburb of Bondi. Sara and I were playing darts when he came over and said something to the fact that he could teach us how to play with a blow stick. (His sense of humor was awesome!). Over the next few months, we all became good friends and regulars at Champion's bar, a rough bar full of Maoris. (they look mean but are sweethearts really.)
He loved bottled Guinness.

I heard from Mannie was a few years later when I was in London, maybe in 1994.